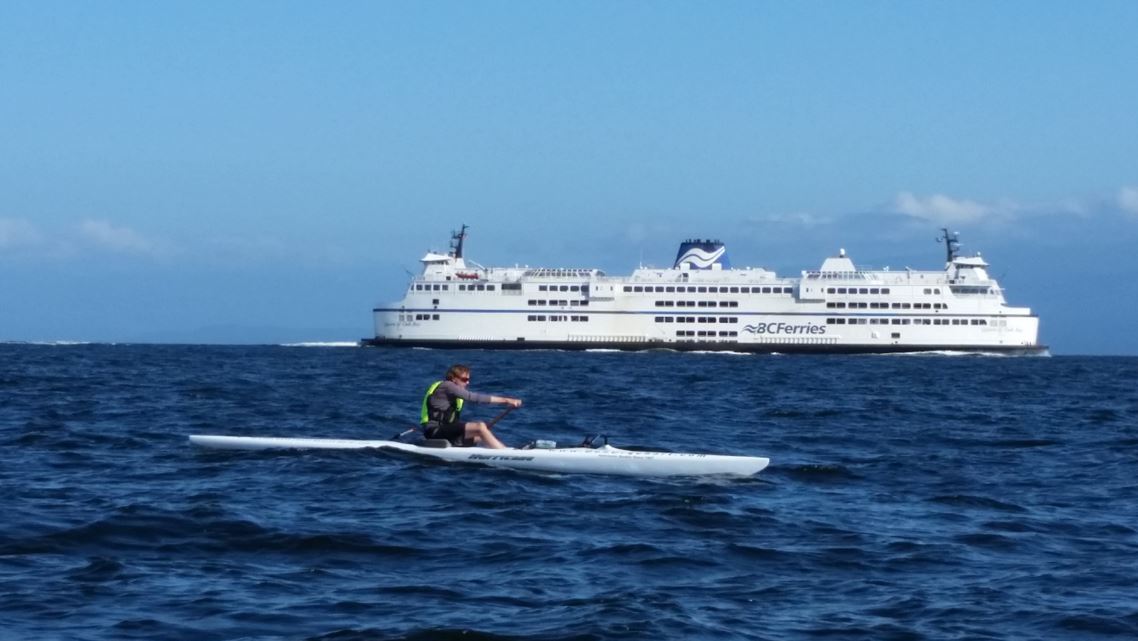 Thank you so much for your donations. We raised $3,343.00 for Charles Dickens Elementary School (100 percent of all donations go to Charles Dickens Elementary School).
I wrote a short recap to a friend and who also donated to the event. I thought I would share it with everyone who would like to know more about the final two days leading up to the crossing and the crossing itself.

The crossing went well. I did a fair amount of research on the Strait and trained as much as possible. I was really happy with respect to how everything unfolded and I also learned a lot while I crossed. I set my schedule to the tides, flows and winds but I underestimated my average speed in the first 22 miles and I arrived an hour too early at my 25-mile waypoint. This made the next 1.5 hours of paddling brutal and it took a lot out of me. Once the hour passed and the tide went to slack and turned I was off again at good average speeds. I crossed in 8 hours which included my resting times which were 3 to 5 minutes every hour and two 15 minute breaks.

I was really looking forward to seeing some wildlife along the way and maybe have proposes or white-sided dolphins run alongside me – but I did not see anything except a couple of seagulls and a harbour seal – Lol.
I was a bit of a deer in headlights on this crossing because I really had no idea how my body would respond physically. I had another mishap the night before I took the Ferry to Nanaimo. I was setting up my OC1 for Sat Nav and checking all the vulnerable areas of the canoe when I noticed a slight fracture in my rudder cable. A friend came over to replace the part but when doing so the internal cable housing broke which rendered the OC useless. I have a second OC 1 but it’s not a racing hull and weighs about 4 to 5 pound heavier and was not properly fitted to me. I was crushed at this mishap and beside myself. Six months of prep and all of a sudden I am staring at my broken OC that cannot be fixed inside of two weeks. I got up at 6 am the next morning and brought my other OC back to my house and did a refit of the OC plus an install of the brackets for the navigation devices. The OC performed perfectly and was a touch more work to paddle but I had a lot of sizable swell and wind in the first 22 miles so this made up for the extra weight.

Arriving at Vanier Park boat launch at Kitsilano was a great feeling but once I stepped off the OC I kind of had to learn how to walk again for the first few meters. There was also a small welcoming party which was completely unexpected but so appreciated…Thank you!

Written by Don Urquhart – Fundraising for our community